The Rossini Symphonic Orchestra is the official orchestra of the province of Pesaro e Urbino, in central  Italy. It operates both in  Pesaro and in Fano, and for the sixth year in a row it has received the acknowledgement of the Italian Ministery for Art and Culture.  The orchestra, born in Rossini’s hometown, is specialized in the Maestro’s classical period.

The main director is Maestro Daniele Agiman, from Milan. His professionalism has successfully melted with the art direction of Maestro Roberto Molinelli, who  has promoted the development of a project on contamination between genres and on contemporary music.

The orchestra’s prestige has been acknowledged over the years by its repeated participation in the Rossini Opera Festival programme.
The orchestra’s activities are in constant growth, with approximately ninety performances per year throughout Italy. In particular, it has been organizing a number of productions for the public administrations of the Province of Pesaro and Urbino, in the historical venues of the area: Pesaro (at Teatro Rossini and Rocca Costanza), Fano (at Teatro della Fortuna and Corte Malatestiana), Urbino (at Teatro Sanzio).

In 2005 OSR performed in South Corea; in 2007 and 2008 in Malta, and in 2008 at Ankara in Turkey. In 2010 it was invited to Amstetten in Austria for the performance of “Il Trovatore”. In 2011 it played prestigeous performances in famous Italian theatres such as Teatro Bonci in Cesena and Teatro Dal Verme in Milan. Among its greatest successes and satisfactions, the collaboration with leading artists such as Dimitra Theodossiou, Nicola Alaimo, Andrea Battistoni, Simonide Braconi, Roberto Cappello, Enrico Dindo, Mario Marzi, Denia Mazzola Gavazzeni, Massimo Quarta, Corrado Rovaris,Alberto Zedda. Maestro Bruno Maronna is the orchestra’s General Director, and Maestro Saul Salucci is its Chairman.

This year, OSR will be participating in the Rossini Opera Festival in the performances of “La scala di seta” and “Il viaggio a Reims”.

Saul Salucci has obtained a cello Music Degree from the State Music Conservatory “G. Rossini” in Pesaro. After studying with Mo. Claudio Casadei and Mo. Valter Di Stefano, he has taken part to specialization courses  Marianne Chen at “Istituto Musicale di San Marino” (San Marino Music Institute). He has been playing with local chamber music groups and orchestras also as a  cello leader.

Since 1994 he has been the Chairman of the Pesaro Symphonic Orchestra and in 2004 he was appointed Chairman of the G. Rossini Symphonic Orchestra (O.S.R.), the music institution which has taken over the Pesaro area activities and  has become the official orchestra of the province  of Pesaro and Urbino. In the same year he directed the summer events Concerti d’Estate and Teatri in Concerto, music festivals organised in the historical theatres and locations of the area.
In 2005 he became the Art Director of the New Year’s concert (Concerto di Capodanno)of the Rossini Theatre in Pesaro.
From  2006 to 2009 he was in charge of the orchestra Art Direction for the concert season Il Maggio della Musica, taking place in the most prestigious locations in the city of Naples.

In 2007 he was elected Chairman of the Council of Cultural Associations (Consulta delle Associazioni Culturali) of the municipality of Fano. In November of the same year he became the Art Director of Urbino concerts season,  performed at Raffaello Sanzio theatre, in Urbino. In 2008 he was appointed President of the “Concorso di Musica da Camera Città di Pesaro” (Pesaro’s chamber music contest).
In 2008, in collaboration with Mauro Tamburini, he founded Golfo Mistico, music and culture magazine,  where he also collaborated as an editor.
In 2009 he was appointed Art Director of the G. Rossini Symphonic Orchestra with which he carried out, in 2010, 93 performances all over the country and also participated to the Rossini Opera Festival.
In the same year he became a member of the board in charge of the auditions of opera singers for the Festival Pergine Spettacolo Aperto (Trento, Italy).
Since 2010 he is in charge of the artistic programme for Musica a Corte, summer concerts held in Fano, Italy, for Festival Giovani per la Musica (young musicians’ festival) held in June and organised by the Municipality of Pesaro, Italy, and for Il Salotto di Gioachino, a series of conferences and concerts in collaboration with the Rossini Foundation and the Rossini Opera Festival.
Over the last four years he has been organising tours in South Corea, Turkey, Austria and Malta.

Under his management the O.S.R. has played inRome at the auditorium Parco della Musica and in the church of Santa Maria Maggiore, in Milan at Teatro dal Verme and at the Sala Verdi, in Ancona at Teatro delle Muse, in Florence in the church of Santa Maria del Fiore and in Naples, in the  Reggia di Capodimonte.
To date, he has been collaborating with many artists such as Alberto Zedda, Mariella Devia, Enrico Dindo, Nicola Alaimo, Michele Mariotti, Corrado Rovaris, Beppe De Tomasi, Roberto Molinelli, Daniele Agiman. 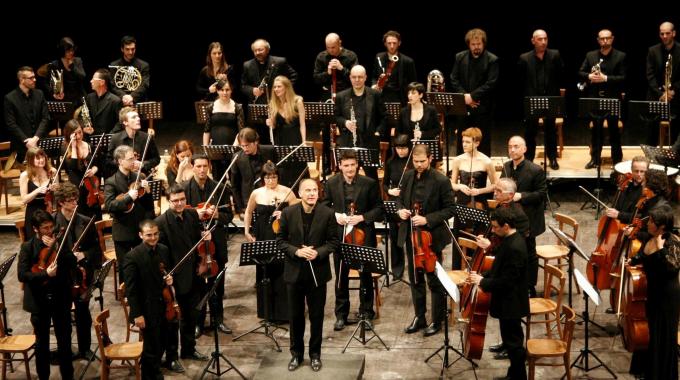